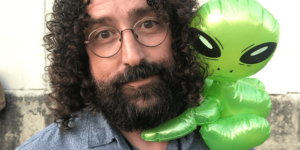 He’s the morning co-host on Birmingham Mountain Radio and he’s the head of A&R for ThinkIndie, the distribution company founded by the Coalition of Independent Music Stores.

And for 25 years, Scott Register has been the taste-making host of Reg’s Coffeehouse, now a four-hour Sunday morning specialty that has survived multiple Birmingham, Alabama stations, format changes, and even a stint as an internet-only stream.

Celebrating 25 years this January, I caught up with Reg to talk about the show, his rise as an industry tastemaker, and the threads that run through all of it.

There have been a few twists and turns to say the least. As David Byrne might ask, “How did [you] get here?”

The genesis of it was back in 1996 when Dave Rossi took over WRAX. I met him while I was doing radio promotion for an ad agency that handled PR for the City Stages Festival – my first job right out of college.

We got along so well musically, at some point he suggested that I do a show on The X. When he first brought it up, I thought he wanted me to program it – I didn’t realize he wanted me to host it too. He tells me, “The show starts the third Sunday of January (’97).” I had a producer for six weeks and then I was on my own.

The show went from WRAX to 107.7 “The X” – which was a flamethrower of a signal. When you included all the repeaters and other signals, you could hear Reg’s Coffeehouse all over Alabama and into Mississippi.

So was it just you and Rossi? When did the show’s reputation as a tastemaker start to blow up?

Dave was obviously a huge part, but there are a couple of other players. Through the festival, I ultimately managed to get on the program committee. I met and got to know Don Van Cleave, who had founded a record store called the Magic Platter, where I also shopped. He later ran CIMS – the Coalition of Independent Music Stores.

I realized Don got a bunch of music early, so I’d raid his inbox. I remember Train being one of the first to break out from the show. I took the CD from a box sitting behind Don’s desk. There was a lot of stuff from Aware Records. The first box of records sold by Aware was shipped to Magic Platter. Later, Sony told us that 10,000 of the first 100,000 Train albums sold in Birmingham.

At the same time, Rossi was finding stuff like Matchbox Twenty – I can’t take credit for that one, but we were both finding things and sometimes getting credit for each other’s discoveries. We were riding some early Dave Matthews Band success, too.

I remember Vertical Horizon  – the label was working some track that wasn’t going anywhere and we started playing “Everything You Want,” and the phones just went crazy. God, I miss those days.

WRAX was buzzing as a tastemaker station at this point?

Maybe after Mayer: I had a listener call me and she said she was up at Eddie’s Attic in Decatur. She says there was this opening act that I needed to hear. I told her to tell the guy to send me something. A CD shows up and it was John Mayer. No label. No manager. I played for Van Cleave and he said he wanted a box. They started selling about a box a week. Mayer drives out, we put him on the Coffeehouse. Rossi hears it and starts spinning it full time.

But in the beginning, Van Cleave and I were sending those John Mayer discs to everyone you could think of — you’d be surprised at how little interest there actually was!

Another key component was the Fox TV affiliate and Dennis Leonard – he’s a huge music fan and he came in and said he wanted to own the new music scene via their wake-up show — all these bands would come through and hit the TV station as well.

So it’s really about building this community at which you guys were the center. This is when I start hearing your name when I was at VH1.

That’s Rossi. Dave and VH1 SVP/Talent Rick Krim had a connection, so that’s how some of the music made its way there. In turn, VH1 shows like Crossroads were a big influence on me and where I wanted to take Coffeehouse.

There was a lot going on. CIMS was getting big and Don hired me to do marketing. I also managed to get an A&R consulting gig with Clive Davis’ J Records – but the stuff I was chasing was getting signed elsewhere. Clive probably laughed at me a thousand times. It just wasn’t the right fit. I ultimately ended up working with Gary Gersh at multiple labels for eight years.

So where is Coffeehouse during all this?

RAX fell apart and the show landed on Lite 94 – an AC station. They only put up with the show because it had an advertising base. But Gigi South took over the cluster and wanted to try a Triple A station — Live 100.5.

Sadly they killed that station in 2010, and it was over. I quit radio.

There was a backlash — something like 23,000 people on a Facebook page raising hell. But I was done — too pissed off to continue.

Yeah, the guys at Birmingham Mountain Radio, including Geno Pearson, wanted to start an online radio station. We were in the basement of an advertising agency. We had no idea if anyone would be there to listen, but they were.

Before long we were billing so much as an internet station, the terrestrial stations started coming back around to court us. We ended up working with Summit Media on a translator for WYPA. We’re also on their HD-2.

Somehow I ended up co-hosting mornings along with hosting Reg’s Coffeehouse. At the same time I had moved into the A&R position at ThinkIndie, putting out physical copies of cool stuff for the stores.

So which is the side hustle – BMR or Think Indie?

It’s concentric circles or a Venn diagram. There’s no side hustle.

Indie music retail, against almost impossible odds, is kind of thriving. Where is it going?

It’s harder and harder to sell physical copies of new music because you just can’t bring in hundreds of copies of something and take a chance — there’s not enough margin for error. At the same time, I see new artists popping right and left. What I want to do is try to get some of these artists who don’t release  physical product to start creating physical product – there is demand. I see it all the time – especially on the hip-hop side of things.

So what’s the common thread through all of this?

At the end of the day I love artist development. Nothing’s more exciting than seeing a record store full of people checking out an artist they just learned about. It’s a different kind of energy. We all love that feeling of “Yeah, I was there when…”

Previous The Top 22 Triple A Radio Songs 1-30-22
Next Worth Watching – Franz Ferdinand, Alt-J, Hurray for the Riff Raff