The late WFUV/New York radio icon Rita Houston was honored at the Virtual NON-COMMvention Thursday by way of an award and honorarium in her name.

The Rita Houston Spirit of NON-COMM Award was created to salute a member of the non-commercial AAA radio and music industry community who demonstrates the spirit and enthusiasm for the Triple A radio format, as exemplified by Rita Houston. An honorarium will accompany the award — granted to  cover conference expenses for one outstanding woman working in Triple A radio, with special consideration given to candidates working in a smaller markets with limited budgets.

Of Jennifer Daunt, WXPN’s Dan Reed said, “She is a strong supporter of the Triple A format, for which she has been a tireless champion, and of the NON-COMMvention. She promotes cool records, and has great relationships across the board.”

In receiving the award, Daunt reflected on her years-long relationship with Houston, saying, “She always said, ‘make decisions from the gut, the heart; be real.’ She was always the programmer that marketing departments wanted to hear about first – ‘what does Rita think? We were so luck to have her. We were so lucky.”

Rita’s wife, Laura Fedele, assisted in presenting the award adding, “Pay it forward. You’ll know you’re on the right track if you open your hotel room door and the police are there.”

Singleton added, “For all of us at WFUV, it’s comforting to know that Rita’s enormous spirit will live on in this annual award. It would give Rita a big smile to know that she’s still a presence at the NON-COMMvention.”

Japanese Breakfast debuts Top 5 and is #1 Vinyl. Crowded House and Wolf Alice are … 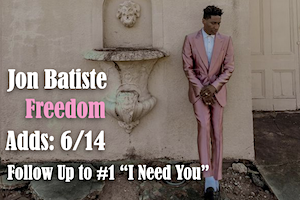