Severe ratings problems in NYC, LA, and SF are the result of systemic problems with execution…

Update 3/1/21: I’m adding this note to reflect the considerable feedback I’ve received since posting this piece. Generally speaking, that feedback has come from two constituencies; The overwhelming majority saying, “Thank you for saying this out loud,” and a second, very much smaller group taking some level of offense. This is not the intent. It is an attempt to ring some alarm bells at senior levels in an effort to course correct these stations.

To clarify, the idea here is not to debate artists, the value or lack thereof of TikTok, or the history of Alternative Rock Radio. The question is whether or not the ALT format, as currently executed by a major radio corporation, is actually viable.  Apologies to any great radio and label folks who felt this piece was unhelpful. However, we need great radio — and these stations can be be just that.

The problems Entercom is having with its ALT format are mounting, with myriad execution issues resulting in breathtaking under-performance in major markets.

The January Nielsen ratings are in, and it’s more of the same.

In Los Angeles, legendary call letters KROQ have become increasingly meaningless as the station posts just a 1.7 share – suddenly looking up at niche players like KCRW (1.8) and even Classical KUSC (2.1). Those may be apples-to-oranges comparisons, but direct format competition confirms trouble as iHeart’s ALT 98.7  appears to pull away in January, posting a 2.7 share.

New York’s ALT 92.3 cannot get itself over radio’s version of the Mendoza Line, posting another sub 2-share at 1.9. This, despite a cume of more than a million people and a programming strategy entirely focused on minimal commercial interruption.

The “two minute promise (no more than 2 minutes of commercials at a time)” pounded by ALT 92.3 should deliver what we used to call Time Spent Listening (TSL). But it isn’t, so something else is going very wrong.

In listening to Entercom’s ALT stations, there are dozens of execution errors that collectively account for their failure.

I’ll focus on just two of the biggies: 1) Botched music segmentation, and 2) a lack of brand authenticity. 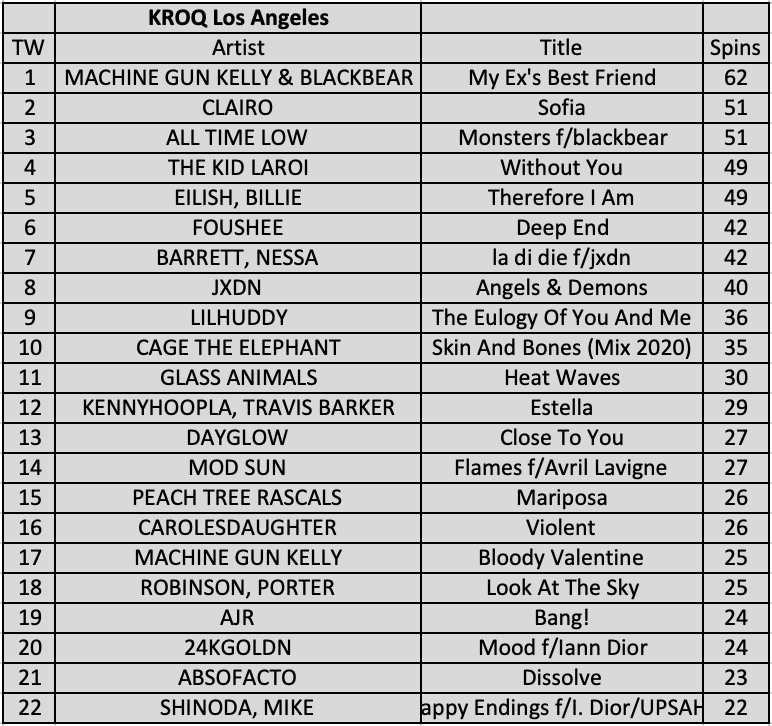 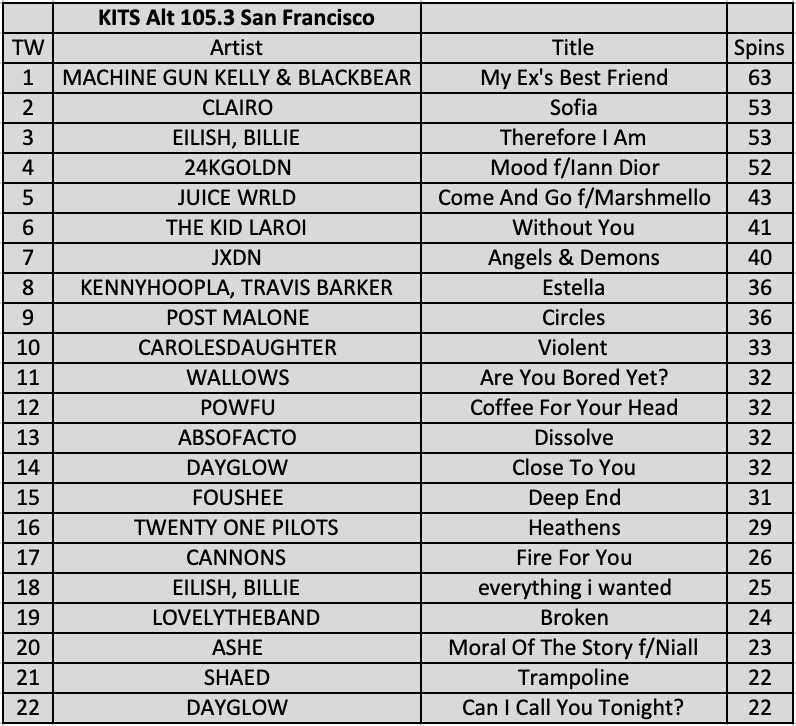 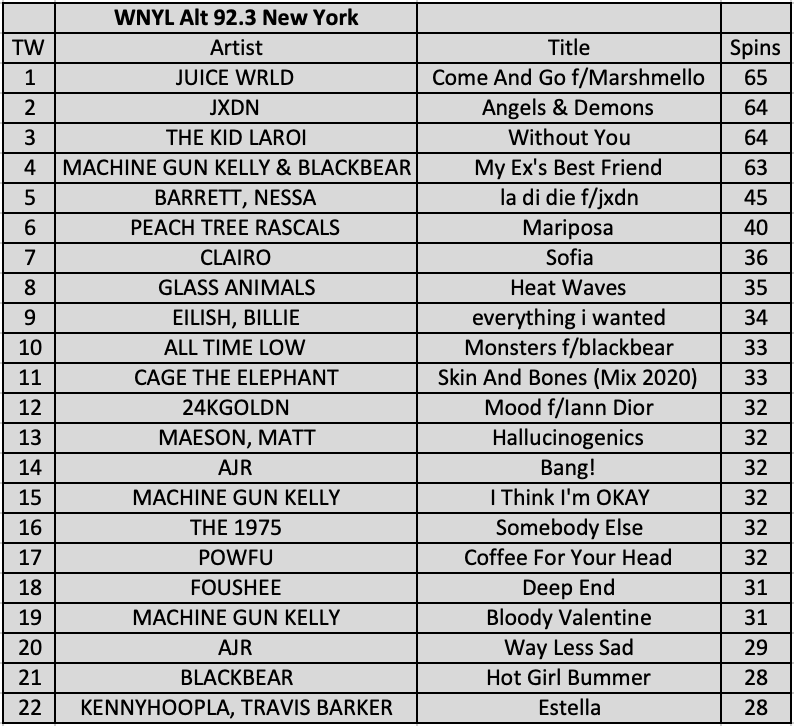 In reviewing the playlists of Entercom’s ALT stations, it becomes quickly apparent that there is a heavy corporate hand in the decision-making. Further, some of that centralized decision-making appears to have been outsourced to TikTok.

The TikTok-ing of the ALT format causes a couple of issues relating to music segmentation — a lot of TikTok hits simply don’t fit together. A radio segue from Clairo to a classic from Red Hot Chili Peppers basically frustrates two sets of listeners, and this constant flushing of audience is the primary reason for the lack of TSL. It’s almost impossible to listen to Entercom ALT stations for more than two consecutive songs.

TikTok-ing has resulted in the importation of a steady stream of white-kid pop songs that don’t have a lot in common with the idea of Alternative. Billie Eilish is lightning in a bottle. Much of the rest, while often quite good, will ultimately result in little more than a flash in the pan. ALT, as executed, is manifesting itself as a never-ending string of often name-interchangeable one hit wonders with a dash of career artists sprinkled in.

Compounding the TSL issue may be oppressive rotations. Perhaps designed to address short bursts of commuter and in-car listening, 65 spins a week can wear thin quickly in a stuck-at-home environment. New York’s ALT 92.3 played Machine Gun Kelly’s “My Bloody Valentine” roughly 65 times/week since June of 2020, now settling in at just 4-5 times per day in 2021. After 1800 spins, is it possible that fatigue has set in?

A white-kid pop song approach to a radio format might be a great idea, but you can’t pass it off as Alternative. The idea that songs that are omnipresent on a teen social media platform are also “Alternative” is incongruent.

Not to take anything away from Mod Sun/Avril Lavigne’s “Flames,” but three plays a day on World Famous KROQ? And 23 spins a week for 2017’s “Dissolve” from Absofacto? How about a dozen plays of Gotye’s 2011 hit “Somebody I Used to Know?” This, from the station that used to cause near-riots in support of bands like Depeche Mode?

The problems at San Francisco’s ALT 105.3 (formerly the great Live 105) can be summed up by its 36 spins last week of Post Malone’s “Circles.” Incredible pop song. Also currently #5 at Adult Contemporary.

Houston, we have a problem, and the problem is branding. Every time these stations say they’re Alternative they lie – and a big chunk of the audience knows it.

A simple way to gauge the success of a brand is to simply ask yourself, “Why am I here? Why am I buying this?” You might answer with things like price, design, durability, convenience, new.

It works with radio too. “Why am I here? Why am I listening to this instead of something else?” When I ask myself that question of Entercom’s ALT stations, I kind of draw a blank. I’m honestly not sure what the value proposition is.

ALT 92.3 keeps interrupting the music to tell me that they don’t play many commercials. They then follow it with commercials. After the commercials, they tell me again. It’s weird.

Until Entercom gets some vision behind its ALT approach, expect these stations to struggle, if not disappear. 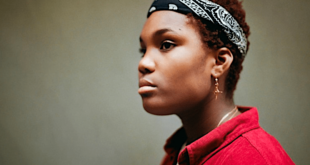 The National move up to #14; Arlo Parks (pictured), New Pornographers, and Arcs debut in …