Our annual countdown of the people, music, ideas, and news that impacted the year, including

2021 was the year that radio programmers finally figured out that streaming numbers were not actually a substitute for research. Last year we learned about all the games labels play to reach streaming thresholds demanded by radio programmers who were a bit out over their skis when it comes to handling data.

The bummer is, the data could be a fantastic research input, given the right context. Radio programmers need to become more sophisticated and ask for better data — labels and managers have it. Until that scenario evolves, in most cases streaming numbers should largely be looked at with suspicion.

Years ago I had a record label that ran through the old ADA. Tiny. We got lucky one time with a track getting added to the old Sacramento Alternative station you might remember — KWOD. A couple of days later, we got a call from an indie promoter who still makes the rounds, demanding $700 or the song would disappear.

About the same time, I had a different indie promoter in my office at KFOG. The person closed the door, and in a raised voice asked “Why won’t you just take the money!”

Needless to say, I hate the practice of pay for play. I think it’s anti-artist, unethical, prevents more deserving music from hitting the air, hurts the station by playing bad product, and, oh yeah, it’s illegal.

The practice remains rampant, and it’s why our charts are ranked by audience reach and not spins. Spins are nonsense.

We can always expect major labels and some artist managers to try to find loopholes to goose spins in the overnight via cash-strapped mom & pop stations. The shocker in 2021 was how much the practice was seeping into NON-COMM radio.

It’s incomprehensible to me that someone would put an institutional licensee such as a major university at risk with this knuckleheaded behavior. If the board of that university found out that their radio station was taking cash in exchange for airplay, heads would roll.

Someone will be deeply embarrassed and possibly even fired (has it happened already?) for engaging in this behavior in 2022.

Interestingly, it’s so easy to stop. Labels just have to turn off the faucet.

Just about a year ago, in February, I wrote a piece suggesting that the Alternative or “Alt” format was in deep trouble — particularly on the Audacy side of the equation.

Did a thoughtful conversation ensue? Not really.

So without going deep into exactly why it’s not working, such as suggesting that trying to turn Machine Gun Kelly and some song about monsters into a 24/7 format might not resonate, we’ll just update the status from February.

Alt stations outside of Audacy also struggle, but it’s worth noting that iHeart’s Alt 98.7/Los Angeles is the clear winner in LA, even with its road-hugging 2.3 share. Both stations cume about a million people, so it’s fair to surmise these are the exact same people simply punching between the two. If Lisa Worden’s 98.7 didn’t have KROQ acting as boat anchor, her numbers would pop simply based on improved TSL. I’m not sure the reverse would be true.

Alt 98.7 is the better station, but still has numerous fixable issues. The question is: Can Lisa deliver a knockout punch? 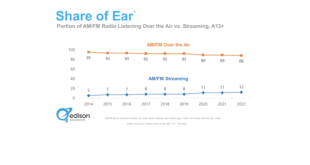