…is how much the vinyl records market is worth in the U.S. It should be more than double that.

In 2021, the U.S. music industry reached an all time high in revenue — $15 billion, according to numbers released by the Recording Industry Association of America (RIAA).

Technically, 2021’s $15b is worth less than 1999’s $14.6b when you account for inflation. But this is not a story about macro-economics, and frankly, I don’t see anyone in the music business complaining. The labels are awash in money, and the business appears completely recession-proof.

An interesting sliver of the 2021 revenue story, and we do mean sliver, is that sales of vinyl records crossed $1 billion – up 61% over 2020. Even CD sales were up slightly for the first time in years. Combined they were responsible for about 11% of the overall music business at $1,656,000,000. 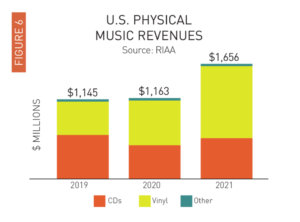 Vinyl’s resurgence is remarkable. On death’s door, along with the shops that sold physical music, efforts such as Record Store Day literally re-built this cottage industry.

What’s more, vinyl could have done $2 billion in ’21 if it weren’t for a lack of manufacturing capacity.

It’s estimated that there is currently capacity to manufacture 160 million vinyl units – but the demand is estimated as high as 400 million.

Until very recently, vinyl was sort of this hobby-level “little engine that could.” Every year there was a little bit of growth, spurring news articles about how cute it was that vinyl was still around.

It stopped being cute at about $600 million in annual revenue. That’s when the major labels, which had long shuttered their manufacturing plants, starting thinking that perhaps they were leaving money on the table.

As the majors went back in, they did so using independent pressing plants. The knock on effect was that small labels and independent artists, who were sometimes pressing only hundreds of copies, were bumped down the priority list.

One of the issues is that, to press vinyl, you need a lacquer master and related pressing plates. Creating these components is a time-consuming art, and it introduces an inefficiency when pressing small runs of product.

Thus, small labels and artists find themselves on wait lists that can be as long as ten months. That’s a real problem when roughly 40% of the music industry is independent. Physical product is a big part of the revenue pie for independent artists.

What to do? Build capacity.

Who should do it? If Jack White had his way, it would be the majors who abandoned their plants and are now muscling out the very artists who re-built this part of the industry. He even made a direct plea to the majors from his own Third Man Records pressing plant.

In the video below, Jack White addresses an anxious nation: 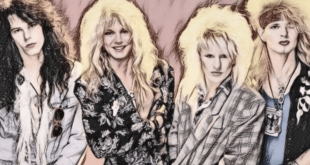 Alternative Is About to Have Its Hair Band Moment

Nirvana and grunge wiped out Hair Bands almost overnight. A similar purge is brewing at …